The following text was my contribution to the exhibition catalog Thinking Different - Thinking Jacquard.
The exhibition was organized by Textile Kultur Haslach and ETN / European Textile Network. Haslach, Austria, summer of 2009

Recent developments in Jacquard weaving
My practical involvement with Jacquard weaving dates back to 1985, when I purchased a 400 hook coarse pitch Jacquard from the sample weaving studio of a weaving mill on the North West Coast of Norway. The Jacquard logic is similar to single unit draw looms: In a draw loom you have to pick up every single pattern row on a string, and when weaving, you retrieve the strings/sheds from the pattern warp in the correct sequence. In a Jacquard loom it takes time to punch the cards and lace the chain, but the weaving itself is fast.  Although I was very excited about the loom, I soon realized that it was inefficient for one-off pieces. The whole purpose of a Jacquard is that once you have a design stored on a card chain, it can be woven over and over again. The time to make the cards must be divided on many pieces in order to make sense.
At ITMA (International Textile Machinery and Accessories) in Paris in 1987 it became obvious that weaving industry were ready to embrace the new technology. Several different companies offered electronic Jacquards as well as software to prepare designs for them. In the late eighties electronics and micro-chips had become cheap enough and computers and software programmes common enough that weaving mills dared to invest in the new technology. The big improvement was to abandon card punching. Even if these looms were made for industry, we were a few textile artists and designers who dreamt about getting access to such equipment – some day.
In 1990 the Norwegian Government introduced the ‘Information Technology programme’. This programme was designed to encourage universities and colleges to propose research projects incorporating new technology with traditional studies. I was teaching at the Textile Department of the College of Art and Design in Oslo. The invitation stated that special priority would be given to projects involving traditional crafts, as well as typical female studies. The programme owed its existence to the new state income from the oil drilling off the Norwegian coast. 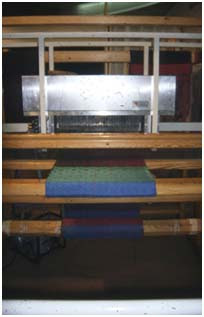 I felt that this programme was specially created for ME! Overnight I wrote an application for my ultimate dream - the loom that would combine the freedom of tapestry weaving with the speed of a shuttle loom.  The loom should be operated by the artist/designer, and function as an extension to the sketchbook.
We got 100% of the amount, not only for that year, but also the following year!
The first working prototype was operational in February 1991, and my college presented the project at the annual Talentbörse in Munich that same spring.  Up till then I had not dared to estimate a potential market for such a loom, but the feedback in Germany was overwhelming. Textile Forum wrote about the project, and the ball started to roll.
Even though the Information Technology programme was discontinued by the end of 1992, this 2-year window had proven that it was feasible to make such a loom – based on different principles than the Jacquard loom.
The way was paved for creating the thread controller no. 1 – the TC-1!
For the development of Jacquard weaving and the beginning of the TC-1 there were several projects of eminent importance:
In 1992 I went to Lisio in Florence, Italy: In order to be able to develop a new kind of technology, it was necessary to get a thorough understanding of the 200 year old principles of the Jacquard. The complex weave structures I had admired in museums and books suddenly became understandable. I saw even clearer that there would be a need for my dream-loom in order to apply all these incredible weave structures in textile art pieces.
The following years were characterised by a struggle for funding in order to pursue my idea further but as a single female textile artist/educator without industrial support or engineering background it seemed to be impossible to get support.
Only in 1995 when Tronrud Engineering, the company that had built the first prototype in 1990/91, decided to pursue the idea, the situation improved. We agreed on starting serial production of the TC-1 based on a joint effort: Their engineering and production skills were combined with my knowledge of weaving and weavers.  After 2 years I left my job at the university to work full time at Tronrud Engineering where I still am today.

Ideally, we wanted maximum freedom of design, and it should take as little time as possible both to prepare the loom and to weave the fabric.  Only then can the loom become a powerful tool in a creative process. We wanted this freedom on the one hand at an affordable price for individuals and on the other hand with the advantage of a hand operated loom, which makes possible that the weaver controls every single pick. In a hand loom you can paint on the warp, use “impossible” weft materials, you can brocade, use discontinuous wefts, and play with finishing treatments that are not applicable in industry.
The TC-1 had to prove its existence by showing that innovative textiles could be woven on it.   In what followed my close contact with weavers and textile artists was of crucial importance. In many discussions I found that a wish for a practicable and affordable way to produce Jacquard weaves not really existed amongst hand weavers. Jacquard weaves had the image of ugly industrial wares developed by inferior designers for the demands of the market. Many declared that it were precisely the limitations of shaft weaving they appreciated. Anybody in weaving who wanted do free art did tapestry, and hardly anyone was curious about the historical creative potential contained in the Jacquard technique.
It therefore became evident to us that it was not enough to produce the TC-1 serially but that we had to excite a desire and create a market for this new development as had been the case with many a technological innovation in history.
We actually had to train our potential customers and to develop the software for the designing. Around 1990, only industrial Jacquard programmes existed, and even the most basic ones were more expensive than the TC-1 loom. We therefore made a little programme called Weave for Windows. This could translate 16 colours/shades into weave structures in free images, plus handle dobby designs. Carol Westfall invited me to teach a couple of workshops at her university in New Jersey, USA, in 1996: Here I got confirmation that people were eager to learn more about Jacquard weaving.
Around 2000 I started to use Photoshop® for the design process. In 2006 Bhakti Ziek and Alice Schlein published the book The Woven Pixel: Designing for Jacquard and Dobby Looms using Photoshop ®. The book was a boost for Jacquard weaving: Through self-studies people could transform their imagery into woven structures.  The mystery of Jacquard designing was fading.

In the last 20 years many projects and initiatives contributed significantly to the spreading of Jacquard weaving e.g. the Montreal Center for Contemporary Textiles, Canada, of Louise Lémieux Bérubee, the Lisio Foundation in Florence, Italy, for historical Jacquard textiles, the Textile Museum in Tilburg, Netherlands, or more recently Bethanne Knutson’s Jacquard Center and Oriole Mill in North Carolina, USA. Another exciting factor that triggered the development of innovative fabrics was the availability of new, man-made fibers. Books such as Techno-Textiles I & II (Sarah Braddock and Mary O’Mahoney, 1997 and 1998) or the Copper-Hewett exhibition Extreme Textiles, curated by Matilda McQuaid in 2005, brought strong impulses and called attention to the innovative development potential of Jacquard weaving.

Gradually Jacquard weaving has become a wide-fledged medium. Visual artist for instance increasingly avail themselves of the possibility to have their work executed in woven form. But also everyday motifs as one could have printed on coffee mugs or mouse pads are by now transferable into a Jacquard weave. In order to keep up with these developments quality-wise we have to stay focused, strive to become even better at what we do, and consciously gain control of the tools specific for weaving, such as structure, texture, interaction of materials, quality and colours.
After 14-15 years of making TC-1s we face a growing competition from other Jacquard manufacturers. Now that the market is created, others want to be part of it, as well. It is a challenge, and it is also a confirmation that we are on the right track.

I am extremely proud of our customers who are true pioneers challenging themselves and also the established definitions of ‘art/handmade’ versus ‘design/machine made’. Several textile artists now combine design for industry with their own artwork. Some use the TC-1 to prototype fabrics for car interiors, or design upholstery fabrics for the high end contract market. Others make priest vestments and clerical textiles. Yet others do commission weaving, such as reproductions of old textiles for national costumes, restoration of furniture or re-dressing of historic buildings.  Some collaborate with interior architects to create textiles for a specific environment.
I am immensely pleased that the TC-1, Tronrud Engineering and I have contributed to this!
Vibeke Vestby
Digital Weave Norway: TC-1